My birth certificate surely does not show this title (above) as my given name. This is the name that I come up with upon following instruction from facebook to get my ROYAL WEDDING GUEST NAME. Such fun and silliness! Instructions are to take the moniker of Lady (females) or Lord (males) +  a grandparent's first name + high school mascot + county you're from.

Waiting for the pomp and circumstance to begin. Need to go to bed firstly. Wake up around 3am.... maybe .
Then I may have to go back to bed for a time. Tomorrow I head north to finally enjoy that royal wedding dinner that I've talked so much about. I've completed my costuming.....


I made the red felt flower, found some blue feathers in ye olde hobby crafts stash, and my girlfriend sent the crown trinket. Toss it all in a bunch, and hot glue it together. Stick on side of yo head... 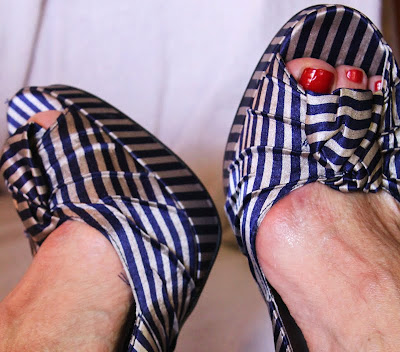 Add some very spiky striped heels for sitting only...


My blue floral headpiece is for the main event. We will be having a formal dinner - wearing gloves too - on Saturday eve.

Email ThisBlogThis!Share to TwitterShare to FacebookShare to Pinterest
Labels: royals

Our first outdoor gathering of the season. Still a bit too cold. The patio and surround really not party ready. Nonetheless, we chose to be outside, visit with friends, imbibe and partake!! 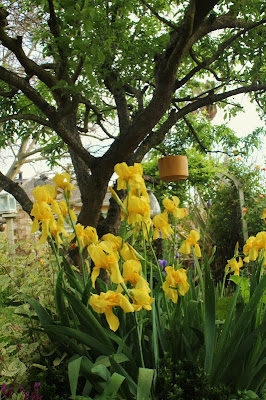 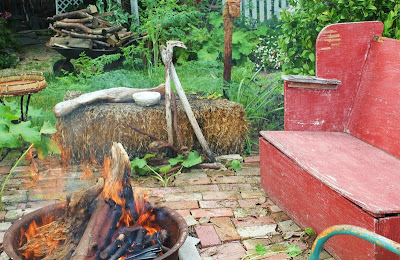 ﻿ ﻿ Many more festivities will be had in our garden over the next few months. We're eager and willing.... and have many hours of work ahead of us! Really, does it ever get done??
Posted by shari at 9:04 PM No comments:

Our History in Pescadero

The San Francisco Chronicle had a well known columnist named Herb Caen. I believe that is where I first read an article he wrote about Duarte's in Pescadero. Duarte's is a small, wooden clad building on the tiny main street of Pescadero. This family owned and run restaurant has been in business since 1894.

The Duarte's Tavern sign has been around since the 1930s.

Every morning, 78-year-old Ron Duarte walks down the steps from his home and directly into the restaurant he owns.
He is the third generation of the family to run Duarte's (pronounced DOO-arts) Tavern in Pescadero, Calif.,Ron's grandfather, Frank Duarte, a Portuguese immigrant, bought the tavern and the land around it for $12 in gold in 1894. In those days, Pescadero, near the Pacific, was a popular settlement for whalers, fishermen and farmers from Portugal.
To start off his business, Frank Duarte Sr. bought a barrel of whiskey from Santa Cruz. "Used to be 10 cents a shot or three shots for two bits," says Ron Duarte. "They'd set the barrel of whiskey here in the bar and people would bring their bottle in and fill it up."

Hubby and I have been going to savor artichoke soup for thirty years or so. Our love for that creamy, luscious soup has never wavered! YYUUUUMMY!! here's the last bowl I had ~ 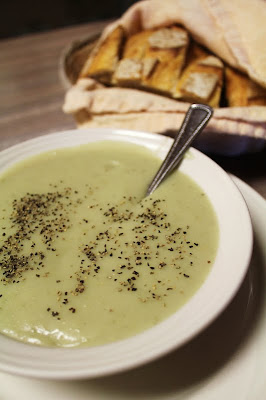 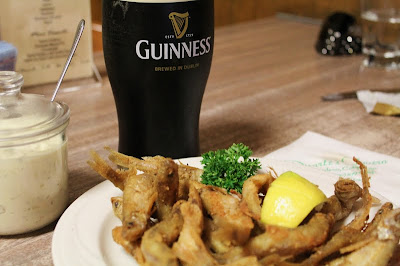 More than just a place we've come to dine for years, we also became engaged on the sands of the beach in Pescadero and then had this very same meal that evening to celebrate. We have history here.

Springtime in the Bay Area.... 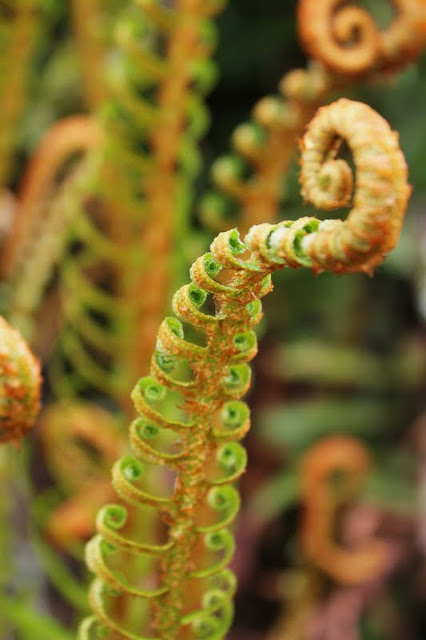 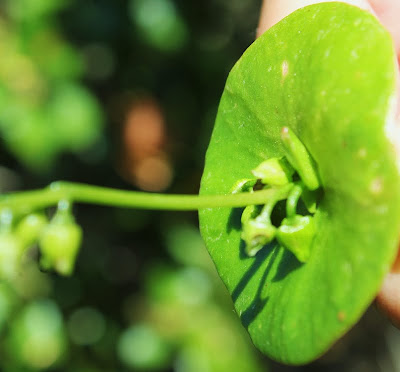 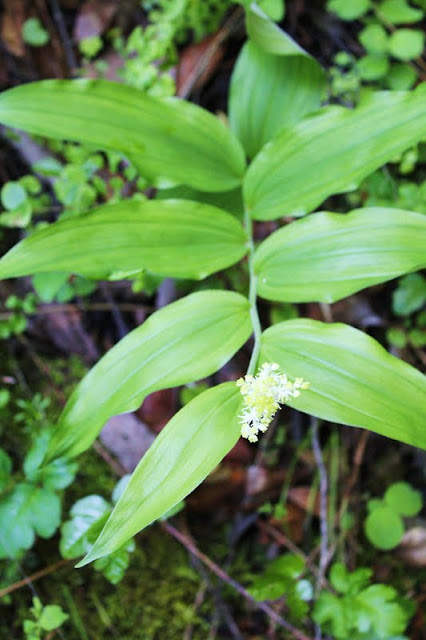 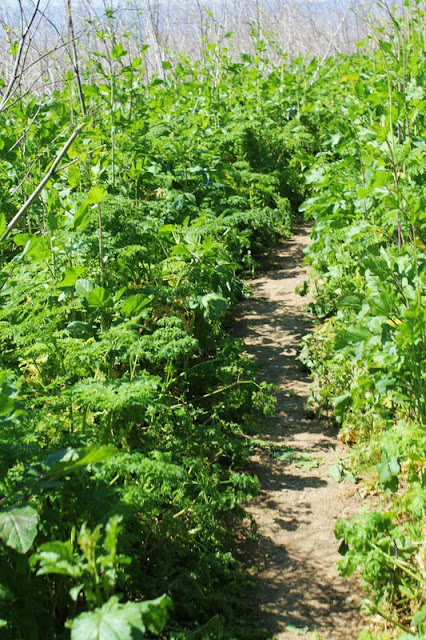 The barely visible trail here was surrounded on both sides by towering weeds. Nearly hip high!

Email ThisBlogThis!Share to TwitterShare to FacebookShare to Pinterest
Labels: plants

Docked in pier H at Pillar Point Harbor is a Salty Lady, or two or three. There's an old "salt" everywhere you look. Rubber booted, stubble-faced and iron clad stomached men who captain  their ladies of the sea out into the Pacific. The Salty Lady was our floating whale watching command center. 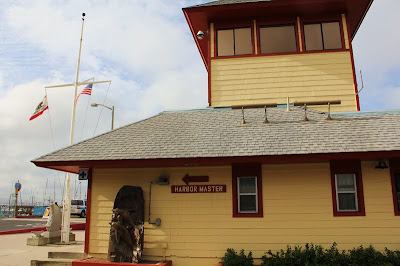 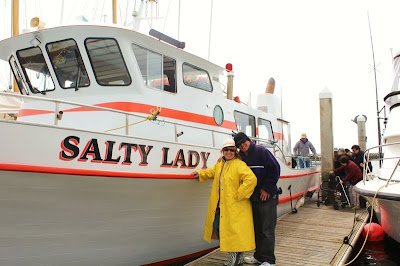 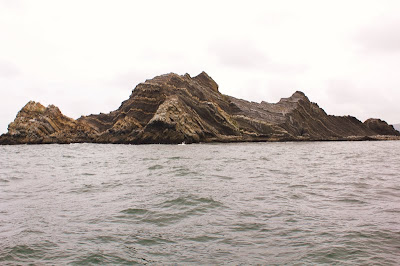 We had GINGER on board too! She didn't wear eyeliner and teeter on high heels though. Our ginger was ingested by many passengers hoping to ease their stomach woes!

Very thankful that we had more (real) excitement scheduled for afterward.  We had lunch plans with friends. A couple of them we hadn't seen in many years. Hours of catching up. Our afternoon turned into evening far too quickly.
Posted by shari at 9:03 PM No comments:

Email ThisBlogThis!Share to TwitterShare to FacebookShare to Pinterest
Labels: whales 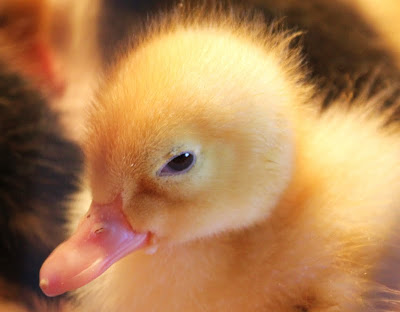 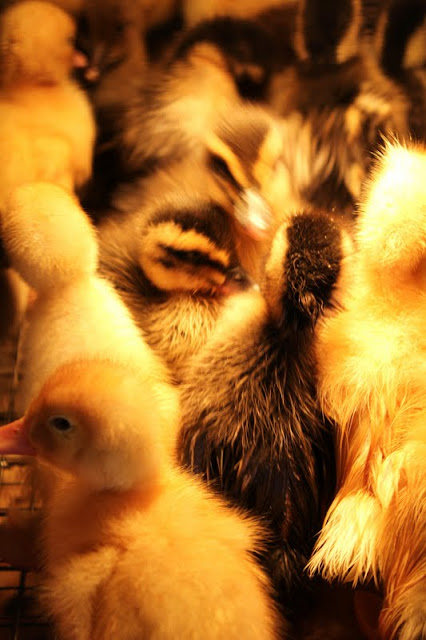 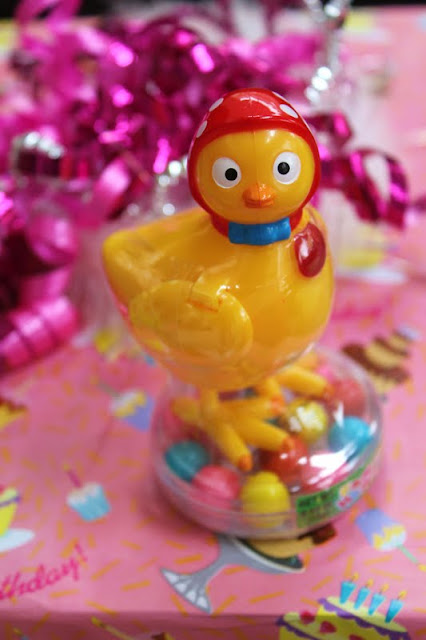 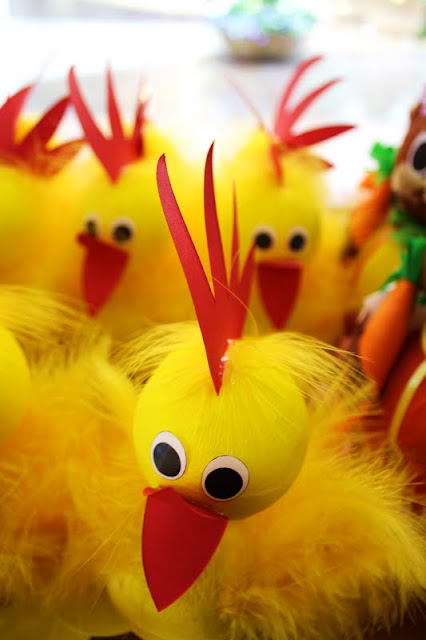 Email ThisBlogThis!Share to TwitterShare to FacebookShare to Pinterest
Labels: Easter

Spouting, breeching, feeding and all other matters - WHALE - we hope to spot some tomorrow. We're at the coast and heading out in the morning on a fishing vessel to track some big ol mammals! 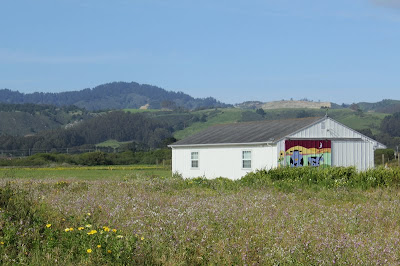 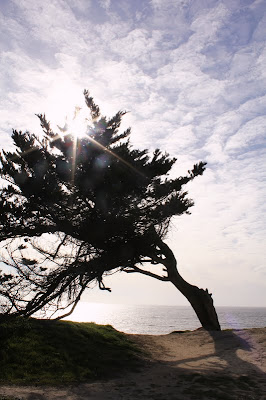 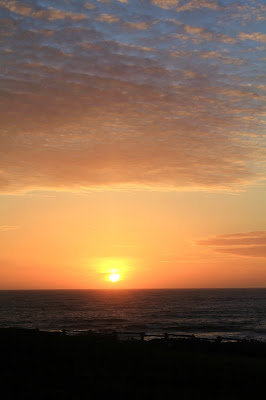 Hope to capture the ultimate National Geographic-type photos and will share them soon.
Posted by shari at 11:41 PM No comments:

Email ThisBlogThis!Share to TwitterShare to FacebookShare to Pinterest
Labels: Half Moon Bay, whales

Royalty For A Day

Soon, very soon ... oh how long we've waited! I will be attending a party that will see me as the secondary-guest-of-honor, the BIG honor to the Royal wedding couple - Prince Wm. and his bride Kate! I found this silly, yet interesting article on hats that was intended to keep us up to speed on the Brit tradition of headwear at functions! Read on  ~ (forewarned it's a tad long)

Bowlers, baker boys, top hats, boaters, deerstalkers and countless ladies creations have been worn by royals and commoners alike through the centuries — a beloved tradition that will be in full force at Prince William and Kate Middleton's April 29 wedding.
Bookmakers are betting on the color of Queen Elizabeth II's hat — odds are on yellow — and the designer making the princess-to-be's honeymoon headpiece. The salmon-colored tricorn hat that Princess Diana wore as she left for her honeymoon in 1981 spawned hundreds of copies.
"We're British — hats are just what we do," Shirley Hex, a milliner who made hats for the queen, the queen's mother and Diana, told The Associated Press. "Choosing the right hat is important for the person wearing it, but it's also important for a designer. The right hat can make a career."
Theories abound on why Britain, compared to other European nations, became a country of mad hatters — an expression referring to the Alice in Wonderland character whose loopy persona was based on the many milliners who suffered neurological damage as they inhaled the mercury used to cure pelts. *(wow - huh??)

And take note of this last line ~
Britain's lousy weather might have contributed to the national obsession, but experts say it's the royal family that has kept it alive.
Well, the royal fam may have kept the tradition alive, but me and my girlfriends will do our darnedest to help the movement along!

I just have to add this other silly tid-bit.....


Laugh all you want, but I will get to be Queen for the day and my royal court & I are taking this way over the top!! Such a good way to live your life!
Posted by shari at 9:47 AM 1 comment:

The much maligned Monday - was anything but a sorry day (this week). I had a very self indulgent day...

Went to see this movie ~

WIN WIN
So very glad I chose this indie-type film! Adored it! I will go to see it a second time with my family. Hubby and his Mom will surely love it! Popcorn for lunch. Have I ever mentioned how much I love popcorn?

Thanks to a dear friend I had a certificate to spend on myself.  The appointment was solely for a pedicure. Yet,  I spent three hours soaking, bathing, jaccuzzi-ing, sauna-ing and reading.  A spa day. It was more than a girl could dream possible...... ahhhhhh! 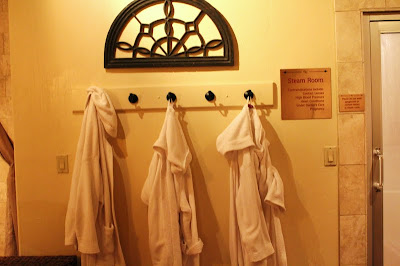 ﻿
The preparation for upcoming events is under way! Toes must be freshly adorned for festivities.... that is a MUST on any party to-do list!﻿

At the very end of the day I didn't even have to cook dinner. Hubby's family all went out to dinner for a Birthday!  * This is edited to add: I realize on this Tuesday morn, that I even forgot to do my Monday laundry duties! Not too much is chore scheduled 'round here - but Mondays do begin with mundane, unwanted work. I feel as though I won the lottery today!
Posted by shari at 9:19 PM 1 comment:

Didn't even realize it, but I had front row seats to an outdoor concert! And, I hadn't even purchased tickets! My experience was one of the most wondrous musical events I have had the pleasure of witnessing! I was privy to an evening avian choir.

I have no photographs of the lovely musicians, my camera was sitting indoors.  During our seasons first
PICNIC in the garden, as I read the newspaper and delighted in the lengthy sunlight , the eves entertainment began. 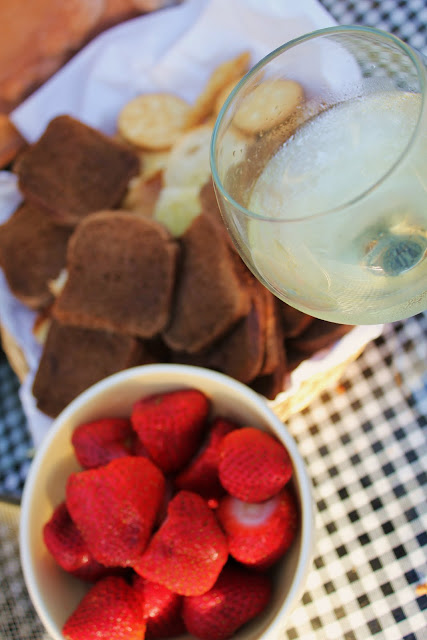 Strike up the chorus - four separate species of birds, all sitting in our fruit trees. Each had their own unique voice. The crows pulled unripe figs from the branches... cawing along as they worked. Hummingbirds buzzed and lit adding their high alto pitch. The "catbird" mocked as he dove at the others. And the meek, sweet & common sparrow sang out periodically adding the essential note of the winds......
ALL SO VERY LOVELY!!

Abundance and a picnic in my outdoor paradise!
Posted by shari at 8:53 PM No comments:

Around the House and I Smell My Dad....

Why that is the strangest title I have every seen!!! Truly though, I remember the scent of my Dad. Or might I say there is a scent that when inhaled I am immediately taken back to childhood. And the fragrance is always connected to my father. His signature scent is  TOMATO PLANT! Don't you just love that smell? Fresh, a little biting, green.....
I planted tomatoes in the raised beds today. As I tilled and composted and placed the young-lings - the scent wafted. I'm thinking of you Dad-O!! 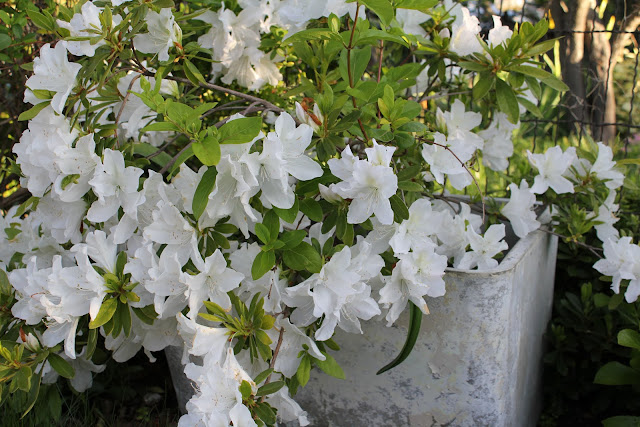 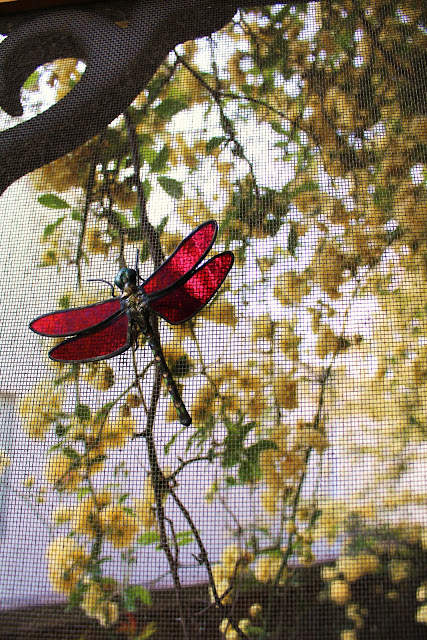 My screen door to the garden with glass dragonfly hovering upon it.... 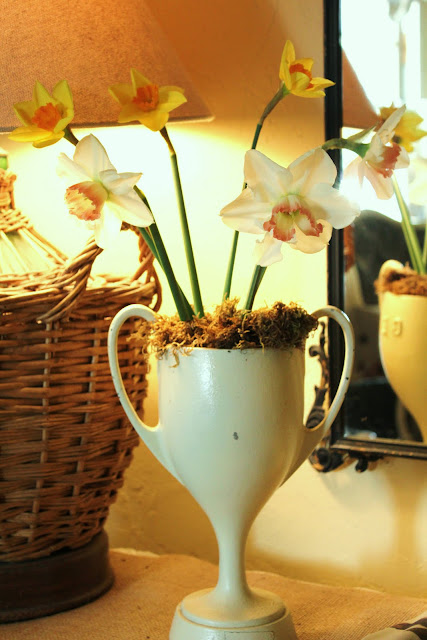 Flowers for the living room. I placed the daffodils into a small jar hidden in the trophy cup, and then added moss to the top so the effect is as if they're sprouting from the ground. 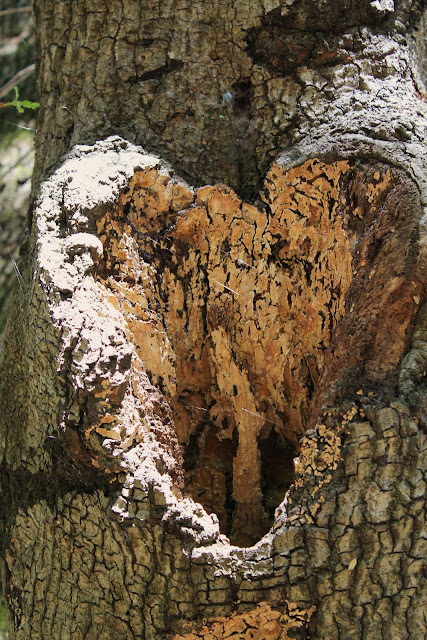 A beautiful quirk of nature. A perfect heart built into the trunk of a tree.....
Posted by shari at 9:55 PM No comments:

Open up for the fresh air to blow through...

All of these things breezed through my thoughts on the hill walk today.... 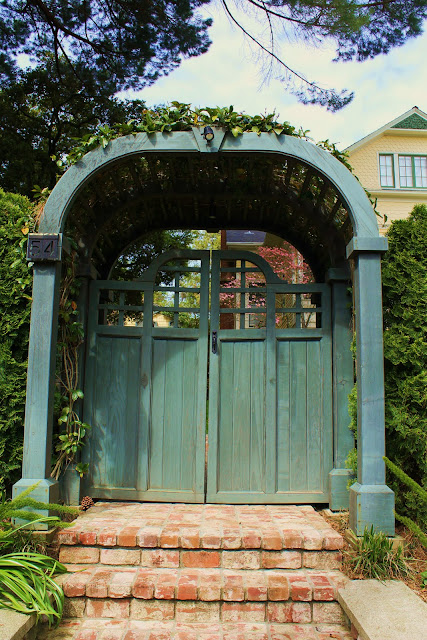 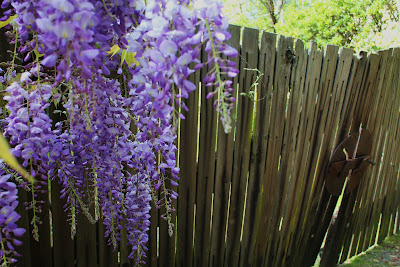 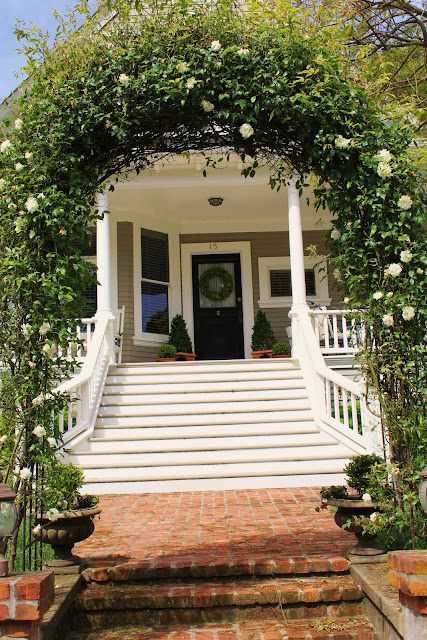 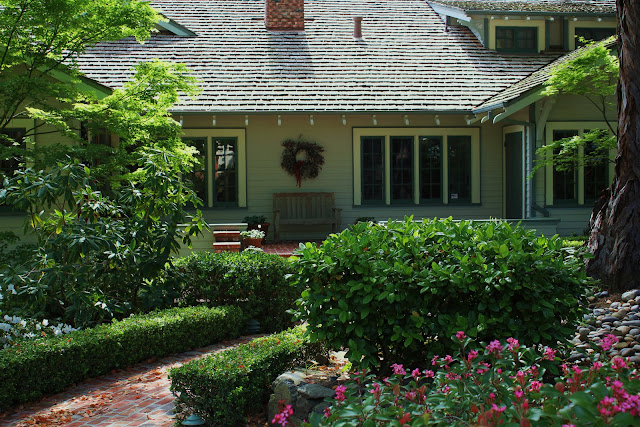 ﻿ Each of these homes was calling me in... the people inside, maybe NOT SO MUCH﻿! They probably wondered who was standing in their front yard taking pictures!

Gardening and what-not at my very own cottage. Some of the what-not has me feeling not quite so breezy, airy & light. Just need to see  a welcome in door; an open door - just like open arms waiting to embrace me! It'll happen.....
Posted by shari at 10:37 PM No comments: